Fey nobility, arcanist-bureaucrats, and anarchist witches falling for their enemies and getting into messy entanglements amid an undeclared war for control of a magepunk city newly inundated with magical energy.

Based on the incredible Mobile Frame Zero: Firebrands by Vincent and Meguey Baker, Hearts of Magic: Threads Entangled is a game about the messy lives of fantasy mages in a City charged with magic. Tell the story of the people of The City as they fight, flirt, and steal time together amid a tense and escalating conflict.

The witch Fyrestryke holds her wand,
white-hot with Magic, pointed at the
Auditor-Librarian. "Why have you come here?"
Auditor Page looks down, embarrassed.
"After I saw your face, I... had to meet you."
The flash of Fyrestryke's magic
dissipating hides the blush on her cheeks.

Play as the Lords and Ladies, the fey noble families of the city, using the fey magic of promises, prophecies, and glamours; The Order, using the arcane techniques of ritual,  patterns, and the careful and esoteric arrangement of mundane items; or The Witches, teaching The City to channel raw magic and weave powerful spells.

The object of the game is to create messy entanglements. Fall in love with your enemies, ally with your rivals, fight with your friends. Players will create characters, establish their situations in solitaire scenes, and build scenes using the ten included games. Rules are lightweight and simple, and give you all the tools you need to establish and play scenes, even if improvising dialogue is not your strongest skill.

Lady Thunderrose pushes the plate away
from zinself. "I didn't come here to be teased, witch."
"Not a tease. A serious invitation."
"You know I could never leave House Facade."
"With some help, you could," the Witch smiles.
Thunderrose whispers, zir eyes flashing, "Only for you."

Play as any kind of person you can imagine, in a fantasy city full of strange fae, visitors from distant lands and other planes, people of all shapes and genders and species. Choose a faction, three attractive qualities, a name, and tell us about yourself as you play. Character creation is quick and easy, and will get you playing in no time even for a player new to tabletops or story games.

The soldier and the revolutionary sit
back to back, feeling the warmth of skin in contact.
"How will we know if the spell works?"
"We will know. The spell will find its mark."
The soldier is silent for a long moment.
"When we have weaved the spell...
can you linger here a while?"

Hearts of Magic: Threads Entangled is made up of ten games:

Hearts of Magic: Threads Entangled is a game for 3-5 players, with no materials necessary beyond a coin to flip, and intended for one-shot play with no prep and no GM. It's perfect for new players and veteran story gamers alike,

"It's true that magic can be dangerous", the
Witch said to the noble Lady with a smile.
"But so can cold steel."
Lady Thistledown can sense the iron of the
Witch's dagger against the bark of her chest.
"If you had wanted to get so close", she laughed,
"you need only have asked."

In order to download this game you must purchase it at or above the minimum price of $10 USD. You will get access to the following files:

Download
Hearts of Magic (demo) 52 kB
Download
So You Want To Be A Fantasy Mech Pilot.pdf 195 kB

Hearts of Magic is a wonderful party game or oneshot system, a delightful repackaging of MF0: Firebrands.

The porting of the "three classes in conflict for a rare resource" to a fantasy universe offers a surprisingly different gameplay, with Anarchists, Bureaucrats, and the Fae behaving and interacting noticeably different from MF0's Revolutionaries, Mercenaries, and Nobles.

An Oblique Discussion is a great social alternative, offering an opportunity to drive the plot while delighting in innuendo and misunderstanding. I'd love to see more Firebrands hacks make use of it in the future. It's a phenomenal contribution to the genre as a whole.

But the real magic at the heart of this game is Weaving a Spell Together. This minigame masterfully blends the sense of mutual sacrifice, thirsty eroticism, and psychedelic exploration of memory. It works at any time, but shines as a late game play, where characters can bring in items from previous scenes, sacrifice the lives of side characters already met, and burn their own future potential in preparation for an explosive finale.

Hearts of Magic is a great game in its own right, as well as a powerful contribution to the Firebrands hack ecosystem. Try it and see!

I don’t see the discussion forum enabled, so I hope it’s ok to provide feedback and questions in a comment.

I didn’t do a side by side comparison with Firebrands or anything here, these are just notes taken on a full read-through.

Is there any difference between this released and the one in the kickstarter campaign ? Thank you !

no! the demo .txt here should be the same as what's going up on the Kickstarter, and the Kickstarter PDFs will be going up though itch! the only difference is it's cheaper though KS, and that once it funds there will be additional art in the book!

cool ! Thank you ! I love Firebrands and Divine Mundane, I will buy your game on Kickstarter.

Curious: does this game use any mechanic like The King is Dead where you can ultimately "win"?

no! but in my experience, when you sum up at the end, it's usually pretty obvious who's coming out ahead after the dust settles, and who isn't. 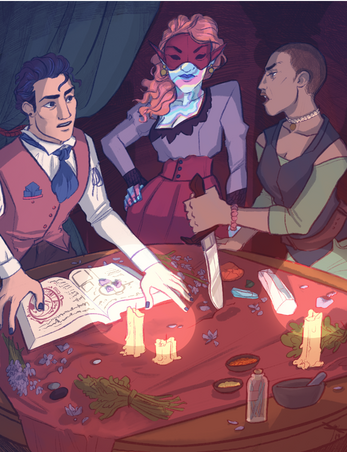 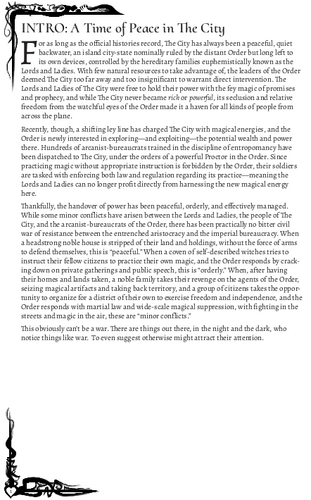 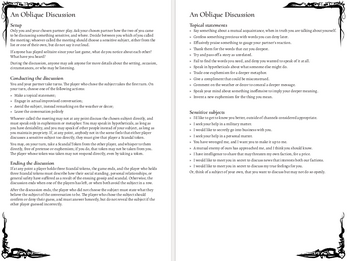